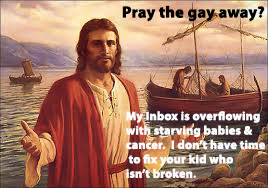 Members of the Mormon church are a good, loving and brave people.  Brave enough to stand up to dangerous and distorted teachings.  Strong enough to put their foot down even when these dangers are found in their own church—I hope!

For decades, the cardinal counsel doled to our gay kids was to ‘Pray the Gay Away.’  This admonition was given by bishops, stake presidents and parents.  It was sanctioned by the apostles and prophets.

As it turns out, this is the worst possible prescription to give these vulnerable children.  Born out by research, science and the lived experience of my very closest friends, it is now recognized that this approach doesn’t work.  It has never worked.  The gay child prays and prays and prays.  No answer, no answer, no answer.  Eventually, depression descends.  The child assumes he must be wicked and worthless in the eyes of God because Deity doesn’t answer the poor kid’s prayers.  A promise made by his trusted priesthood leaders.

I realize that this ill advised counsel was given in ignorance.  We are no longer ignorant.  So, this counsel should never be given, again.  Unless, we really do hate our gay kids.  And want them depressed, dejected and suicidal.  Of course, we don’t want that…I hope!

I thought ‘Pray the Gay Away’ had died a merciful death in the church corridors.  Apparently it hasn’t.

Today, I became aware of a young gay man who was told to get help from a counselor to essentially ‘Pray the Gay Away.’  He was also informed that he can never be happy on “this path.”   Fortunately, the young man has adopted a healthy attitude: “There’s nothing I need to fix.  I was born this way, and for me that’s ok.  I’m happy I was born gay.”

Wow!  Right on, my young friend.  There is nothing to fix.  You were born just the way God created you.

A Call to Courageous Mormons

Core to Christ’s teaching and example is looking out for the “least of these.”  Gay people are not lesser in any way.  But for my entire life, we have treated them as a lower form, far below us.  This proclivity is still prevalent in our LDS culture.

What would Jesus do if he were here?  You know what he would do…I hope.

So, where are the brave members who will stand up to the deleterious directive to ‘Pray the Gay Away?’  It’s time that it die, never to be resurrected again.

3 thoughts on “Pray the Gay Away”