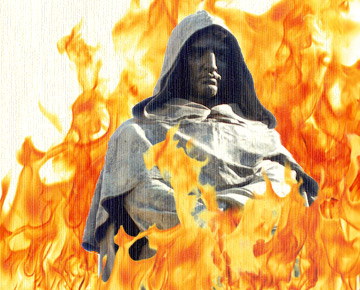 On Feb 17, 1600, Giordano Bruno was burned at the stake.  This scientist and philosopher was accused of heresy by the Catholic Inquisition in Rome.  He refused to recant his belief that the earth was not the center of the universe.  His teaching that our planet rotates around the sun was in direct contradiction to the Vatican.

A couple of weeks ago, I posted a survey entitled, “Is Sam Young Racist?” Every question represented beliefs that I actually espoused for 62 years of my life. The survey results:   69% believe I’m racist.   31% say I’m not.

BTW, I no longer believe anything on that list.

Over the past 2 weeks, I have privately posed my survey questions to several people who are not familiar with Mormon beliefs. I asked them to answer as if these were MY beliefs.  Without exception, every single person had a similar reaction to the following question:

Am I racist if, I BELIEVE that a person with brown skin will turn white when they become “righteous?”

They either laughed at the absurdity or scrunched their face in disgust. Then they said something like this, “I’ll pray for your soul.”

For most of my life, I believed the “Indians” would turn white if they joined the Mormon Church and lived righteously.  I can remember a prophet, Spencer W. Kimball, making the observation that a child in the Indian Placement program had become “several shades lighter than her parents.”  And, that “these young members of the Church are changing to whiteness and delightsomeness.”

Well…..I don’t believe that anymore.  At best, it’s metaphor.  The skin color of native Americans is gorgeous.  Just the way God created it to be.

To say this in public, might be heresy in my church.  A church that I love.  If I suffer the same fate as Bruno, my white skin is be about to turn several shades darker.

Thanks for helping me understand where I need improvement. I desire to eliminate all vestiges of racism that exist in my being.