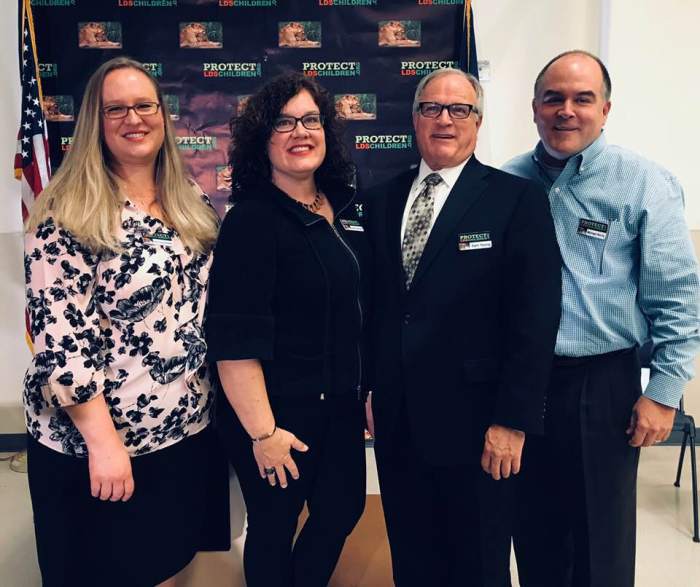 Everything went spectacularly well at today’s press conference.  Two major Houston TV stations showed up, along with a great audience of 45 people.  Thanks to all of you who attended!!!

We are getting better at public relations.  I have been told that after a press conference, another press release should be immediately sent to the media.  We missed that opportunity in Salt Lake.  Not this time.  Below is the release that was just sent to thousands of media outlets, including every one in Houston.

HOUSTON, TX – In just the last eight weeks over 14,000 Americans have signed a petition calling on the Church of Jesus Christ of Latter-day Saints to end the inappropriate practice of “Bishops’ Interviews” and that number is growing each day.

The mounting support for ending this decades-long practice by the LDS Church — in which Church elders conduct one-on-one meetings with children, without their parents present, and which often involve discussions and questions of a sexual nature — was highlighted at a press conference organized in Houston today by the Protect-the-Children Initiative which is a grassroots organization founded by Sam Young, a Houston business owner, father of six daughters, and active LDS Church member.

“The long overdue national conversation our country is having on sexual abuse and harassment has laid bare the reality that practices that may have been accepted years ago should no longer tolerated today,” Young said today. “As the father of six daughters and a lifelong member of the LDS Church I believe it’s wholly inappropriate for children to have to sit behind closed doors with a male Church leader, and without their parents present, and be asked questions regarding their sexual history or desires. It’s time for us, as Mormons, and friends of Mormons, to stand up for our children which is why we’re calling on the LDS Church to end the practice of private one-on-one interviews with children and male leaders.”

Young was joined at today’s press conference by Michael Norris, a Houston SNAP (Survivors Network of those Abused by Priests) leader and Natasha Helfer Parker, a certified family therapist with 20 years of experience treating individuals, couples and families. They also presented over 300 Victims Impact Statements from LDS Church members who have already shared their personal stories of inappropriate, and in some cases potentially unlawful, interactions that have allegedly taken place during Bishops’ Interviews within the LDS Church. You can read and hear the firsthand accounts of many of these individuals by clicking here.

Over the next 8 weeks, the Protect-the-Children Initiative will continue to gather signatures and stories from LDS Church members from around the country and will hold a rally in Salt

Lake City on March 30th where the signed petitions will be formally delivered to LDS Church leaders.

“This movement is in no way meant to disparage the LDS Church, which many of us have devoted our lives to, but rather to protect both our Church and its most vulnerable members. The LDS Church, and frankly every religious institution, should be doing everything possible to ensure our children are protected and ending this antiquated and inappropriate practice would be a step towards doing just that,” Young concluded.

BTW, the video of the press conference is being edited and will be shared soon.

Until the harm to our kids stops, WE WILL NOT STOP.